The interface needs to do three things:

Now, here is  where I differ from many other authors on this subject…

To Isolate or Not to Isolate?

Most articles on this subject will have you isolating all three lines so that there is no electrical connection between the radio and the computer. This generally involves using an opto-isolator for the PTT, and audio transformers on the audio lines. Most of us don’t have those parts in our junk box. Further, I don’t see the point. If the radio and computer are jointly grounded to the same point, and if proper shielded cable is used (we’ll talk about that later), there is no reason why you shouldn’t get good, clean signals to and from your radio without ground loops. That has certainly been my experience.

This circuit provides the following features: 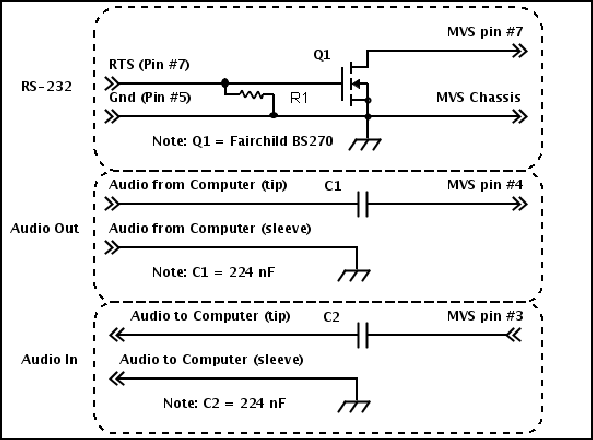 The left shows the connections at the computer end.

The right shows the connections inside the GE-MVS.

All ground connections should be made at both the computer and radio side.

The value of R1 should be around 10K ohms. This resistor pulls the FET gate to ground, ensuring PTT won’t be triggered when the  serial cable is disconnected.

The interface must do two things: send audio back-and-forth, and trigger the PTT.

On the the radio, PTT is triggered by shorting pin #7 to ground. However, AGWpe triggers PTT (on the left audio channel) by setting the serial port’s RTS line to high. This causes it to go from -6.5 volts to +6.5 volts. An enhancement mode N-channel MOSFET is on when a positive voltage is input to the gate. Typically, they are fully saturated with about five volts at the gate, making them operate (in this  case) much like a solid state relay. With the strong negative voltage when RTS is low, no current flows from drain to source.

If you don’t have any capacitors, a straight audio connection will work. However, these capacitors do two things. First, they eliminate any DC from travelling through. Any value of capacitor larger than about 200 nF will achieve this. (Much smaller, and the signal will be attenuated.) At values around 200 - 300 nF, the capacitor will have the secondary effect of seriously attenuating low-frequency audio. So, if you have a 60 cycle  hum from your power supply, it won’t get through. (I used 224 nF because I  had several; choose what you have on hand in this range. Even something like 4.7 uF, which seem to be everywhere, will block DC, though it won’t attenuate the low frequencies.)

Note that the capacitor will reduce the signal level to some degree. You may need to use the computer’s more sensitive mic input rather than line-in.

The interface can be built on a small circuit board, and mounted inside the radio. The pinout of the BS270 MOSFET is at right. The capacitors are non-polarized, so can be oriented in either direction. Make sure nothing comes in contact with the metal parts of the radio.

The MOSFET, when on, is fully saturated, so it won’t generate any heat. (No resistance, no heat.) 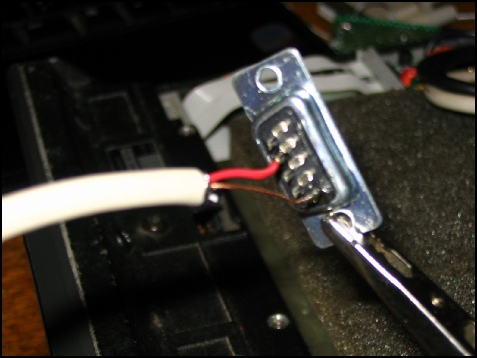 Only two connections are required on the serial plug. Pin #7 is the RTS line, and pin #5 is ground. If you are  using a 25 pin plug, use pins #4 and #7 respectively.

Note that AGWpe can be configured to operate two radios. To do this, wire the DTR pin as well, which will act as PTT for the second radio. This is pin #4, or #20 on a 25 pin plug. 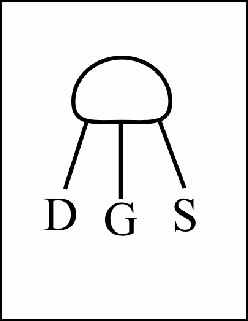 Pinout of the BS270. There is an internal reverse-biased diode between Source and Drain. 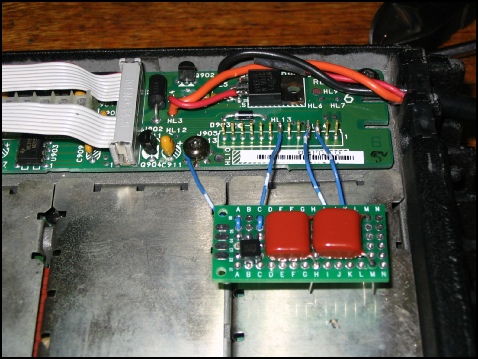 Here, the board is nearly finished, with the connections to the radio shown. Note that the radio should not be powered-up at this point, as the pins on the bottom of the board could be shorted to ground. 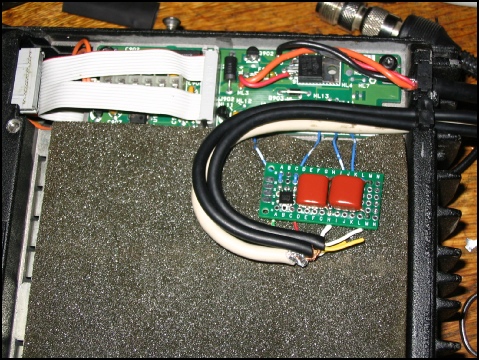 The  finished product. I covered both sides of the board lightly with electrical tape to prevent any shorts. The lid of the radio holds the board down against the foam.

AGWpe uses the left audio channel for the first (or only radio.) This is the tip of the 1/4” plug. The lower sleeve is the ground, while the centre sleeve is the right channel.